A greater understanding of the causes of coastal erosion and damage caused by daily ship-driven mini-tsunamis is obtained by Miros wave measurement sensors. The continuous data collection provides clear evidence which was used to educate captains to better understand the impact of speed and route on the vulnerable coastline.

In gravitas, wave measurement technology is being used to analyse ship-driven ‘mini-tsunamis’ which are becoming a regular occurrence in the shallow waterways of the Oslo fjord. This phenomenon is caused when a significant displacement of water takes place as some of the world’s largest cruise ferries pass at speed over pronounced variations in seabed depth near the Ildjernsflu lighthouse. This is a shallow region extending approximately 700m along the ship track and is around 14m at its shallowest depth. The depth before and after the shoal is approximately 46m.

Residents in Flaskebekk, a small village nestled within the fjord south of Oslo, frequently see the sea quickly retreat and drag the contents of the seashore with it. Then, a short time later, a strong, long wave over a metre high and up to 1km long is seen extending across the wide inlet. This runs up and down the shoreline each minute or so until the ship moves into more stable waters1&2. Research has found that the ship’s bow and stern may generate shorter waves, in addition to the long waves.

The investigation was sparked by an intense ‘supercell’ thunderstorm which hit a shallow area of the North Sea floor, generating 50km long depression waves up the Norwegian Trench. The forerunning ‘free wave’ arrived at the coast 24 minutes ahead of the wave attached to the storm. The large, violent waves crashed against piers and promenades causing significant damage and erosion. The incident baffled the country which had only ever experienced similar wave effects caused by landslides. Norwegian authorities were unable to connect any cause to the event.

Working alongside John Grue, an experienced professor of hydrodynamics at the University of Oslo, using Miros’ RangeFinder and WaveWeather technology to measure the height, length, and period of the ship-driven tsunamis free waves and compares it to the storm-induced event to understand more fully what causes them, and their potential impacts.

Ships or vessels passing through a depth of water naturally create waves in their wake – this is widely acknowledged and understood. However, literature on free wave phenomena is lacking. This is largely because super cruise ferries were only introduced in Norway in the early 2000s. The 0.5–1km waves emerge when the ships move past the shallow, great depth changes of the fjord with the highest wave recorded being 1.4m. While this is far from the devastating tsunami assault around the Indian Ocean in 2004, locals living in the fjord are fearful for the environment and the impact on the economy.

The wavefront grows with the shallow water speed, upstream of the ships. Recent studies have found that while the speed of the ship itself will not prevent the ensuing wave, the faster it travels, the larger the wave will be.

The generation of free waves takes place during the period when the forced flow relaxes to the new depth. A sudden start-up from a wave’s ‘rest’ at constant depth is another source of free wave movement, both for ship-driven mini-tsunamis and in the case of the storm of June 20193. Although length and time scales are different in the various cases, there is a similar behaviour between meteotsunamis, ship-generated waves, and the waves generated by landslides and tectonic movement, or earthquakes.

The process to generate the free wave at the point where the depth changed in the fjord was calculated with fully dispersive mathematical model calculations.

Wave radar measurements were collected using Miros’ radar-based RangeFinder (SM-140) IoT sensor technology, installed dry on the shore at Flaskebekk Pier soon after the storm. The RangeFinder was combined with a weather station into a WaveWeather system to provide several additional environmental parameters such as wind speed, wind direction, precipitation, temperature, humidity, and air pressure. This means that with just power and an Internet connection, access to real-time data about the sea state is easily available and shareable on any device.

Ask us about details on this project. 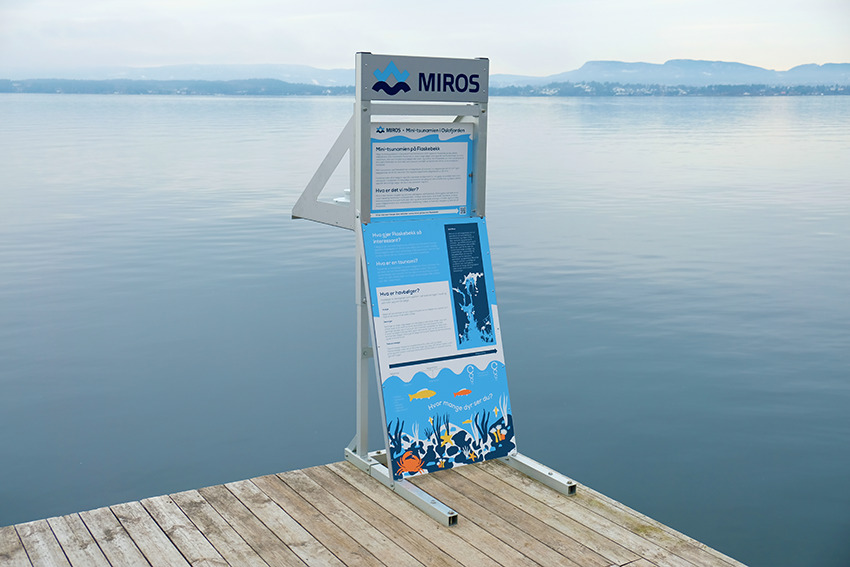 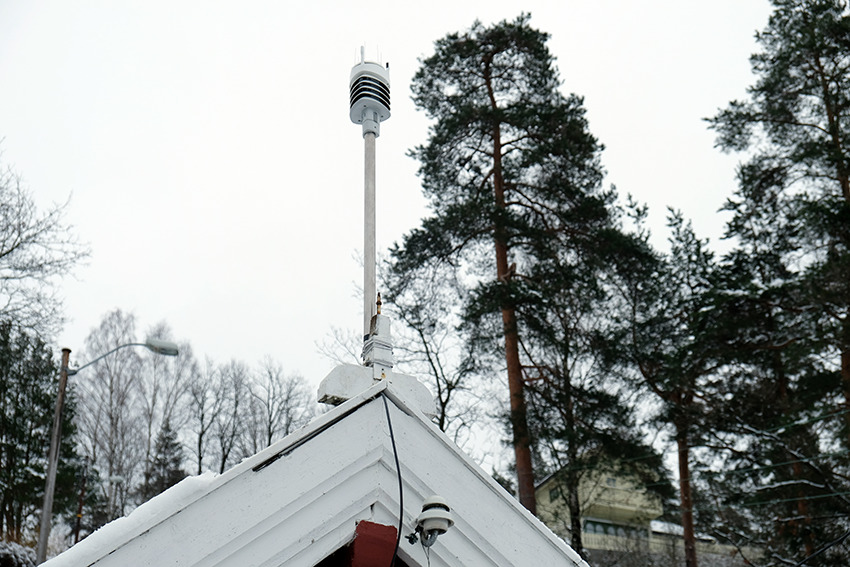 As a stand-alone sensor, RangeFinder provides reliable, highly accurate, real-time measurements of the ocean state. It is also used to assess airgap, tide, water level, and draught. The technology is currently being deployed by the offshore wind sector to enhance safety, efficiency, and performance and extend the lifecycle of wind farm developments.

Unlike laser sensors, the ‘dry’ sensor has millimetre accuracy which is unaffected by fog, rain, and water spray. It is the only DNV-certified product on the market for alpha-factor related wave monitoring. Data is displayed on a user-friendly and customisable dashboard for easy and secure access to sea state information.

The RangeFinder sensor can provide up to 50 measurements per second, but in this case operating continuously at Flaskebekk Pier, the surface elevation is measured twice per second. Long waves of small swells appear in the measurements prior to the main wave between 0.240m and 0.304m in height. These are generated by the ship travelling at 9.6–10m/s (18.6–19.6 knots) interacting with the depth variations of the fjord, ahead of the main shallow region. The bottom topography of the water is in fact very uneven. A slight modification of the ship’s track can enhance or reduce the wave response.

The calculated elevation-trough-elevation wave has a period of 34 seconds, close to the wave radar’s measurements. The dominant wave is produced approximately 90 seconds prior to its arrival at the radar. This is followed by approximately seven short crests between 30 and 103 seconds later in the elevation series, possibly generated by the bow and stern of the ship. 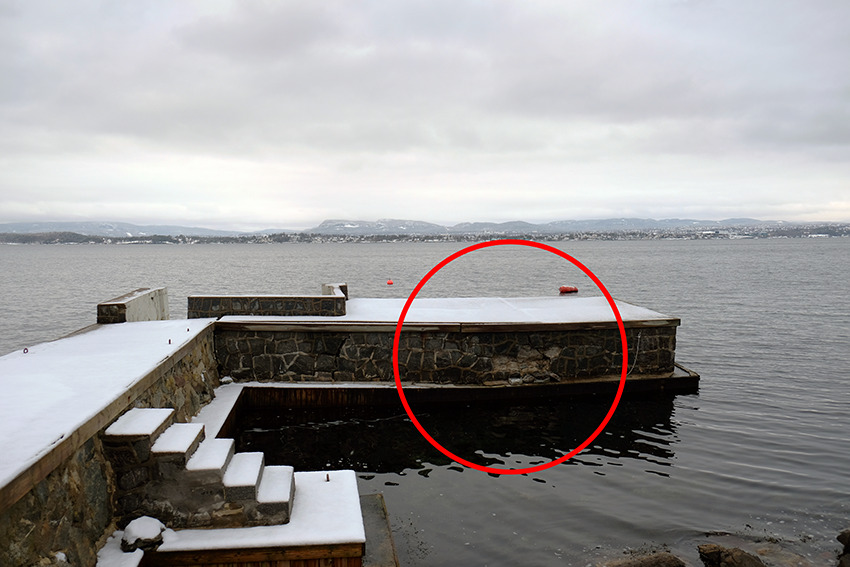 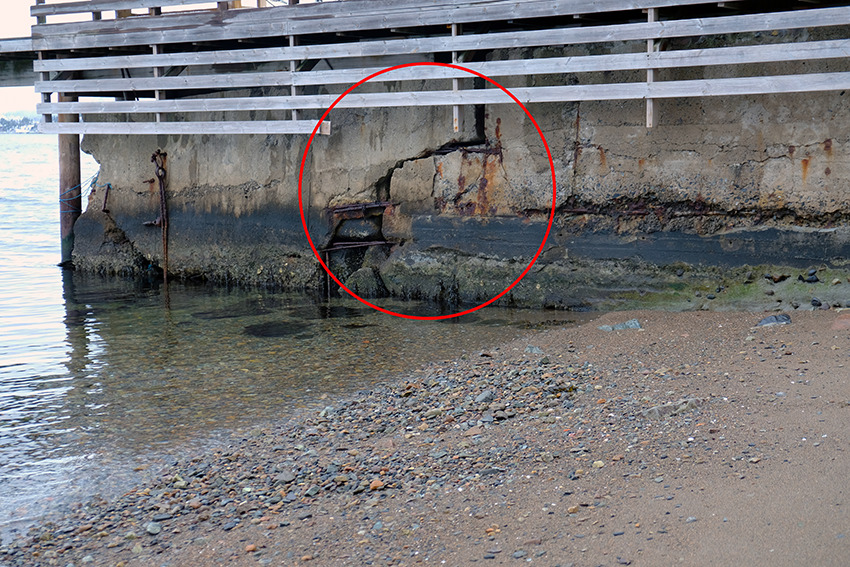 Images: The impacts associated with the “mini-tsunamis” are largely related to erosion of the coastline. Nevertheless, there is also structural damage to private property at the water’s edge.

Ship-driven tsunamis are already threatening the livelihoods of people living along the fjord from Flaskebekk to Asker and all the way to Håøya, the largest island in the Oslo fjord. While there have been no casualties, the mini-tsunamis are considered a safety hazard to the public. However, it is the pristine coastline which is the main victim of this 21st century wave phenomenon.

“Although official vessel traffic regulations could not be changed; we achieved an important behavioural change through science-based communication and education of captains about the damage caused by choice of speeds and routes when passing near the coast. We are proud that Miros’ wave measurements provided the essential evidence and influenced the sailing route change and the speed reduced to eco-speed for the heavy vessels in that area so that further coastal erosion and damage is prevented. This is a win for the coast, the sea, and everyone around. Success stories like this motivate us wave enthusiasts to develop new high-tech solutions to improve offshore safety continuously, and efficiency and to help protect the ocean environment for the greater good”, explains Jonas Røstad, CCO at Miros.

The results garnered from academic research, Miros’ sensor technology and cloud-based analysis has already forced mega ships from the Norwegian fjords to the Marlborough Strait in New Zealand to reduce their speed and mitigate further, permanent damage to the world’s precious shorelines.

Read more about our solutions for the Ports & Coastal segment.