The grounding of an ultra large container ship in the Suez Canal brought traffic on the central shipping route between Europe and Asia to a standstill in 2021 and highlighted the potential issue of ever-increasing ship sizes.

Megaships are particularly attractive for international shipping firms because they offer economies of scale – the larger the ship, the more efficient it is at transporting goods. Over the last decade, the size of container ships internationally has doubled.

According to analysis from Allianz1, the number of 20-foot containers that ships can carry has increased by 1,500 percent over the past 50 years. In the past 15 years alone, approximately 133 ships have been launched with a carrying capacity between 18,000 and 24,000 containers. These are classed as ultra large container vessels – the biggest boats in the world.

The port commissioned a dynamic under-keel clearance (DUKC) system to minimise the impact of dredging to a depth not previously undertaken. This used observations and environmental forecasts to analyse the effects and predict safe transit for vessels calling at port.

Furthermore, water level variations in Lyttelton harbour are known to be complex2. The fluctuations are the result of tide, wind-driven waves, swell, tidal surges, and long waves covering a wide range of frequencies which may differ greatly in space and time.

Infragravity waves are especially a threat to the safety of operations and transit in most harbours; these long waves are difficult to dampen by port protective structures, such as dykes or breakwaters, due to their large wavelength. Once they enter a harbour, they can be amplified and excite semi-closed port basins and/or cargo-type moored vessels.

To accurately measure the complex water level fluctuations at Lyttelton Harbour across the frequency spectrum from wind waves, long waves, and tidal surge, two Miros radar gauges were installed at separate locations in the harbour – one at the port entrance channel and one in the sheltered inner harbour basin.

The RangeFinder SM-140 has been selected as it provides reliable, highly accurate, real-time measurements of airgap, tide, water level, and draught with millimetre accuracy. 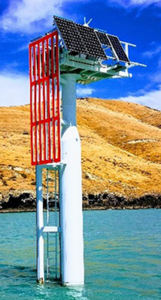 Unlike laser sensors, the IoT -based sensor is unaffected by fog, rain, and water spray. And in contrast to conventional pulsed radar gauges, the dry-mounted instrument uses a frequency modulated continuous wave approach to discard erroneous observations and provide immediate, real-time, reliable data to resolve surface waves. It can provide up to 50 measurements per second, but in this case, the surface elevation is measured two-four times per second.

Image: One of the RangeFinder wave gauges installed in Lyttelton harbour is strategically located and dry-mounted under the right-hand solar panel.

From the port’s experience, this high data rate is extremely helpful for discarding erroneous observations and providing reliable output at the frequencies required to resolve surface waves.

Better management of transit risk for daily shipping operations relies on detailed science-based calculations, considering the latest measured tide and wave conditions, high-resolution forecasts, and state-of-the-art vessel motion modelling. By enabling larger ships to call at Lyttelton Port, local importers and exporters get the best possible and most cost-effective international shipping solution, with container vessels able to carry up to 5,500-6,500 TEUs after the redevelopment work.

The deepening project lengthened the 7km shipping channel by 2.5km and widened it by 20m to increase maximum vessel drafts (the vertical distance between the waterline and the bottom of the vessel’s hull) from 12.4m to more than 13.3m to allow for larger and deeper ships.

Read more about our solutions for the Ports & Coastal segment.